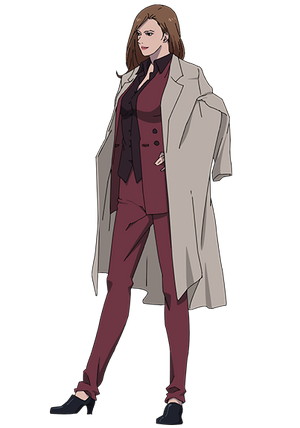 She usually wears long brown coat and a formal attire colored maroon. when wanting to keep a low profile she can be found wearing a dark red dress with a white shirt and a dark red hat.

Bitter Sweet on meeting people shows herself as a out going and friendly person that can get on with anyone and depending on the person can be quite flirty and suggestive. But once she see's her objective she becomes a cold hearted women who will stop at nothing to get her way even going so far shooting people in front of witnesses.

Bitter Sweet met with Patricia Pearl at a cafe, and offered her a job at using her "cleaning service".

Following new information, Bitter Sweet followed a new Black Fairy Tome and that led her to Gilbert Warlock house. She spoke with him, revealing he brought the page and wanting to see it, but Gilbert send her off. She later found Axel Laboo, knowing he gives information to Dorothea and asked him to arrange a meeting with Free and her.

She proposed to work together with Dorothea and they agreed. Bitter Sweet along with Marlya and Klara Kysenaria went back to Gilbert's house. But Gilbert was still refusing to let her see the Black Fairy Tome. She then revealed that the two girls were from Dorothea and summoned her fairy. The Gilbert men started shooting, but were injuring themselves due to her fairy ability. Marlya then used her fairy to neutralized Gilbert and his men surrendered. Bitter Sweet then forced Gilbert to lead her towards the fairy tome and after passing through a secret passage, she closed it behind her, leaving Gilbert and the girls behind. As she later seen the fairy tome, she escaped without taking it as promised.

Upon receiving the news of the appearance of the Black Fairy Tome Nine, she hired Patricia and went after the tome. There they saw Damien Carme and Veronica Thorn running away and then Eajey Daven Thor coming out after them with the tome. Knowing he was strong, she went to Damien offering a deal for them to work together and he accepted.

On the next day they were figuring out what to do, when they saw Free and Marlya and Damien decided to go to them, in attempt to get more info. Moments later, they were attacked by Eajey who was after Damien and Veronica. Bitter Sweet attempted to make a deal offering Veronica, but as that didn't work, Patricia attacked him, but was easily defeated. Bitter Sweet then used her fairy, but was no match for his fairy weapon and was forced to escape. Later she escaped the island with Patricia, mentioning that her father was looking for Black Fairy Tomes before disappearing.

In a bar, Free approached her and offered her that Dorothea will leave her alone and not chase her, if she gives them all the information she has on Gui Carlin and Bitter Sweet agreed.

Knowing where Eajey was, she went to Mazria with Patricia, knowing that Dorothea will attack and hoped she could use the commotion to snatch the black fairy tome.

She is a skilled sword women and gun fighter who can fight evenly against former fairy soldiers. She also possess a fairy by the name of Skriker that has the ability to send any harm dealt to it back to its opponent. She has an eidetic memory.