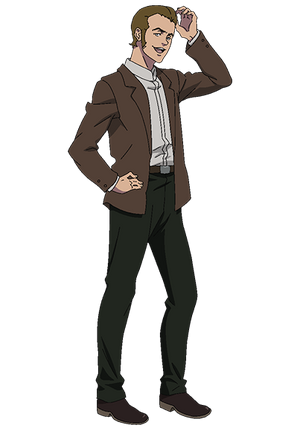 The best way to describe his personality is cocky, arrogant, sleaze, and he knows it he is an informant to the core always sucking up to anyone friend or foe for what ever he can get.

Axel was running from Free Underbar, but ended up in a dead end and Free caught him. He told Free that the information he gave him was legit and Free confirmed. Free then asked him to get him information of Wolfran, Axel told him he didn't had time and needed to do his job for Arcame, but Free insisted and let Axel go.

Axel was later in Timoon, near Cain Distarol for the Black Fairy Tome information, but was surprised to see Free there too. Seeing "Sweetie" Bitter Sweet there too, he wondered what to do, as it was supposed to be easy job to steal from Cain. As Free, Cain and the rest had a nice long conversation, Axel used his fairy to attack them, which forced Damien Carme to check his Black Fairy Tome page and Axel stole it from him. His attempt to escape failed as he was eventually caught by Bitter Sweet and as Free came too, she shot Axel to not let him escape. Axel then threw the Black Fairy Tome page, letting them fight over it and ran away.

As he was seriously injured and laying on the ground, he was approached by Beevee Liscar.

Surviving & recovering from the wound, Axel later went to apologize to Free and Marlya, who then asked him to help them give information about a man they caught.

Later she was approached by Bitter Sweet, requesting he to arrange a meeting with Free. As he met with Free, Free questioned him for Wolfran and if Arcame planned on doing something, but Axel didn't knew anything. He then told Free that a person wanted to meet him and arranged a meeting with Bitter Sweet.

After the events with Schwarz Diese and Dorothea starting to investigate Arcame, Free arrested Axel and put him with another Arcame members, in order to extract some information. As Axel spend the night with the other member, he learned about Christoph Rahn involvement. He was released on the next day and continued to search for Christoph himself and eventually found him dead. He stayed there, knowing that he will be blamed for the murder and later was restrained by Nein Auler, until they got more information about the murder.

Wolfran used his connection in prison to cause riot and freed Axel. He then told him to send a message to Beevee Liscar, having no other choice Axel agreed. He went to meet Beevee, who questioned him how he escaped prison and he told him that Wolfran helped him. He proposed a job to Beevee that intrigued him and made Beevee wonder who will he fight next.

Three months after the events with the Divine Beast, Axel was arrested by Dorothea for escaping prison.