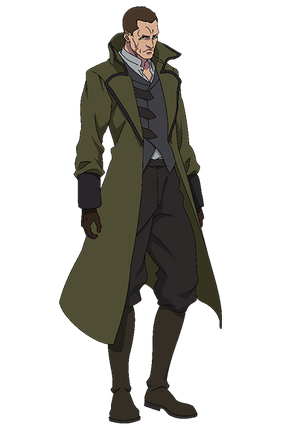 Episode 1
Beevee Liscar (ビーヴィー・リスカー, Bīvī Risukā) is a legendary fairy soldier, who kept fighting until the end. After the war he became an Agent of war and mercenary band leader. He is one of the Seven Knights.

Noticeable scar running down his right temple. Easily identified by the large scabbard he always slings on his back, that holds his fairy weapon

Holds contempt for the weak, always raring to fight a strong opponent.

Beevee met with Wolfran Row making a deal for the artificial fairies. He found the fairies ugly and repulsive and didn't like their existence. He then questioned Wolfran if he was a merchant or warrior or merely a pebble, but Wolfran did not answer.

Beevee met with Schwarz Diese and they organized the train ambush on which Schwarz new Fairy Weapon was being transported. While waiting for the train, Wolfran delivered him a letter and letting him know that Nein Auler won't be on the train, which disappointed Beevee. As the train approached, he used his fairy to derail it. He then fought with Oz Mare and his fairy and later with Free Underbar and his fairy, defeating both of them with ease. As he saw the wounded Oz, he decided to finish him, as he would no longer be able to fight.

As the rebellion of Schwarz started, Beevee led his men into Rodancia attacking the Palace. With ease he was advancing and took down the palace door with his fairy. He was advancing easily in the palace, until he met with Free and started fighting. Free managed to slice his face and with the help of Marlya and Serge, they injured his left arm. Reminded by his men, Beevee called a withdraw. Outside the palace he saw Golbarn troops and chased them away and then fled.

One day Axel Laboo came to Beevee, but Beevee knew he had to be in prison and questioned him how he escaped prison and he told him that Wolfran helped him. He proposed a job to Beevee that intrigued him and made Beevee wonder who will he fight next.

Prior to Golbarn Helwise's funeral, Eins Order made ambush on Ray Dawn's convoy and made him reroute. There Eizenkopf ambushed them again and Beevee showed up. He was excited to fight Ray Dawn, but was pushed back. As Ray Dawn was injured during the ambush, Nein Auler came confronting Beevee. She ordered Dorothea to take away Ray Dawn. Beevee then cut Nein's sword and told Sophie to give her fairy weapon, as he wanted to fight Nein in even terms. As they kept fighting, they used their fairies and Nein's fairy instantly froze Beevee's fairy. After a short conversation, Beevee saw an opening and attacked, but Nein reacted fast, although she received an injury, she cut down Beevee. Sophie then came to him, closing his eyes and turning her gun at Nein.

As one of the Seven Knights he is formidable fighter, who enjoys fighting.