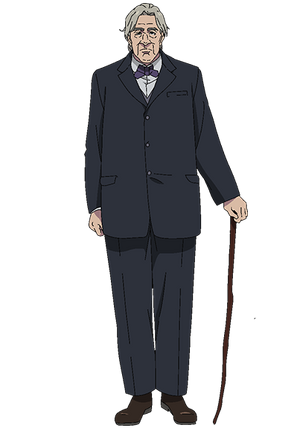 Cain is an elderly man with gray hair and usually wearing a suit and a crane.

Cain was visited by Free Underbar, Marlya Noel and "Sweetie" Bitter Sweet. As they had normal and long conversation, they shifted the talk about fairies and then a fairy controlled by Axel Laboo attacked them in order for Axel to steal the Black Fairy Tome.

After recovering the fairy tome, Marlya and Free went to ask Damien and Cain, how they originally obtained it, but they weren't willing to reveal it. Marlya questioned them if they also have heard of a woman Veronica, but both denied.

As an ordinary man, he doesn't posses any additional power or abilities. As a fairy scholar, he is quite educated on the fairy subject.