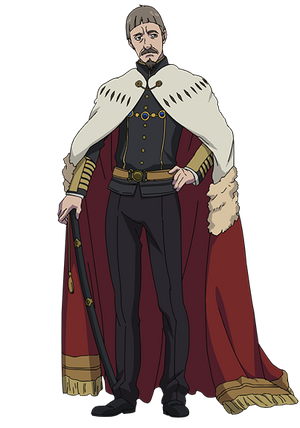 Castal is a middle-aged man with bowl-like haircut and a moustache and small goat beard.

Before the events of the anime/manga, Castal executed three of the five dukes for treason against Zesskia.

When Schwarz Diese showed bravery and saved Golbarn Helwise, Castal requested to see them and complimented him for his actions. He then offered to grant him a wish and Schwarz requested a Fairy Weapon.

Soon after that, Castal was informed by Golbarn about the rebellion Schwartz started. Castal mentioned that they just awarded him, but agreed and stripped him from his title and labelled him traitor, ordering Golbarn to defeat him.

Using secret tunnels, Schwarz was able to reach Castal, who questioned him why he was there and Schwarz told him it was for his sake. He then witnessed Ray Dawn slaying Schwarz and his men with ease.