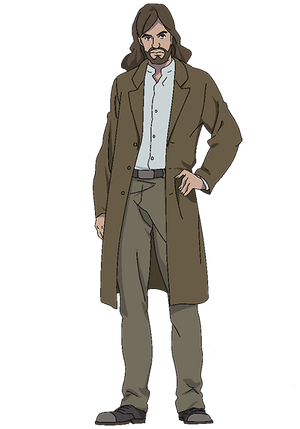 Episode 1
Damien Carme (ダミアン・カルメ, Damian Karume) is a fairy scholar. He is working with Veronica Thorn and collecting pages from the black fairy tome. He is the descendant of Crucia Albastora, the one who wrote the Black Fairy Tome, but changed his name in order to keep his bloodline a secret.

Damien has a long brown hair and short full beard. Most of the time he wears normal clothes: brown pants with white shirt and brown long coat.

Damien send Veronica to steal an item from an auction, a page from the Black Fairy Tome. As she did and returned with the item, just from a glance he understood the item was fake.

Damien was with Cain Distarol, when Free Underbar, Marlya Noel and "Sweetie" Bitter Sweet visited Cain. They had a nice and long conversation, until a fairy attacked them and Damien quickly went to see if his Black Fairy Tome was still there. Revealing the location, Axel Laboo stole it from him. Moments later Damien was watching from a rooftop with Veronica, commenting it was easy to lure them all. As Veronica commented that Marlya may be fairy-possessed Damien was a bit surprised.

After recovering the fairy tome, Marlya and Free went to ask Damien and Cain, how they originally obtained it, but they weren't willing to reveal it. Marlya questioned them if they also have heard of a woman Veronica, but both denied.

Cain informed Damien about the appearance of the Black Fairy Tome Nine. Damien went with Veronica, hoping to get it, but Eajey Daven Thor got before them and they started to fight. Eajey realized Damien ancestry and as they were no match for him, they had to escape. He was later approached by "Sweetie" Bitter Sweet, who offered him to work together in getting the tome and he agreed.

On the next day, they were trying to figure out what to do, they saw Free and Marlya and Damien decided to go to them in attempt to get some info. As he spoke with them, Veronica came running chased by Eajey, as he was worried for her, he called her name and warned Free and Marlya that Eajey had a Fairy Weapon. Hearing him saying Veronica's name, Marlya asked him what was his connection with her.

As he was then arrested by Free and Marlya, they brought him to Dorothea HQ, where he wanted to talk to Nein Auler. He told her who he really was and what his goal. Later Dorothea went after Gui Carlin, for safety measures, he was taken by Free and Marlya to different place.

At the new place, he was visited by Nein and told her about Marco and Glyph being descendants of two of the scholars that wrote the fairy tomes and being from Ein.

Upon receiving the news of Marco obtaining all black fairy tomes, he guessed that his goal was to resurrect the Divine Beast and his next step would be to obtain fairy-possessed fairy organ. He met with Nein and explained the situation and expressed desire to work with them to stop Marco and wanted to meet Golbarn. As Nein agreed, they met with Golbarn and Damien explained all to him. Golbran was disappointed, but ordered Dorothea to arrest Marco and his men.

Three months after the events with the Divine Beast, he went to work at the Ministry of Fairies.

As an ordinary person, he doesn't posses any additional abilities or powers.