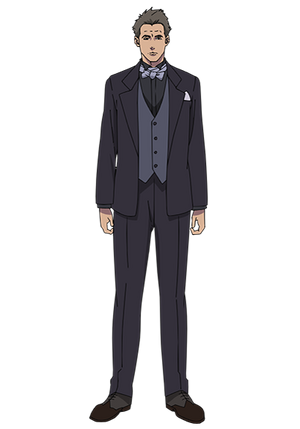 Hearing the news of appearance of Black Fairy Tome Nine, he headed towards the place to obtain it. There he killed all the guards and managed to get it. Veronica Thorn and Damien Carme came wanting to take it too. As they fought, he realized Damien was descendant of the one who wrote the Black Fairy Tome and managed to easily overcome Veronica and her fairy by using his fairy, Sharpsight. As they escaped, he stoke with the remaining alive guard about the creators of the fairy tomes and that he was related to the one who wrote the White Fairy Tome. After which he burned the place and left.

He later learned that Dorothea stopped all ships from leaving the island, so he went after Damien, but found "Sweetie" Bitter Sweet with Veronica. She tried to make a deal with him, but then Patricia Pearl attacked him with her fairy Boneless. He was easily able to defeat her using his fairy weapon. Bitter Sweet then tried attacking him with her fairy, but was no match for the fairy weapon and was forced to escape.

As he chased Veronica, he came to Free Underbar and Marlya Noel. Free tried fighting him, but Eajey easily broke one of Free's swords. Seeing the situation, he changed his mind and told them they can have the black fairy tome, if they can get it from him.

When Dorothea started going after Gui Carlin members, Eajey went to Mazria in his castle. There he started cultivating and mass producing fairy soldiers and had already over 50 fairy soldiers. Dorothea eventually went after him and Eajey was hoping to fight Nein, but he had to face Free. Eajey used his fairy and attempted to use her ability, but as Free had a fairy weapon the ability had no effect. He then ran around the castle and started climbing a tower, where they started fighting with Free. Eventually Free defeated and slashed him, but before falling down, he cut the ropes of the platforms they were standing and made both fall. Eajey fell to his death, but Free was saved by Marlya.