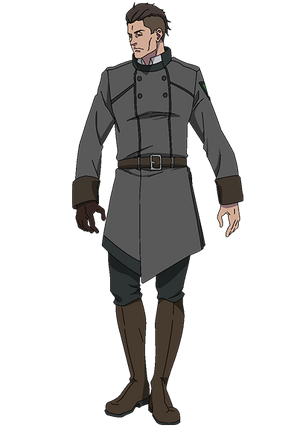 Episode 2
Ewen Breeze (ユアン・ブリーズ, Yuan Burīzu) is one of the Seven Knights.

Ewen is a young man with dark hair and prosthetic right arm that hides a spear.

During the Unification war, Ewen was fighting with Free Underbar. As he defeated him and was about to do a finishing blow, Jet Grave protected Free by giving his own life and taking on Ewen's attack.

Ewen is a fairy soldier and one of the Seven Knights.