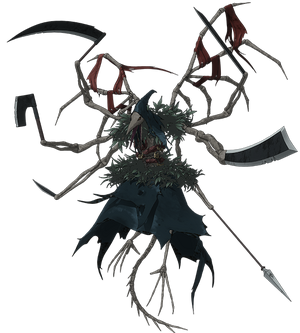 Fitcher has the appearance of scarecrow or a grim reaper with a crow-like face. He has a skeletal body with a long, hooded mantle covered in leaves and bone wings wrapped in red cloth. Fitcher has a six long, skeletal arms ending with a different bladed weapons: a scythe, an axe, a sword, a spear, a knife, and a machete.

Although Fitcher doesn't possess an special abilities, his multiple limbs and variety of blades allows him to dominate in close-quarters combat, cutting and stabbing his opponents to pieces.