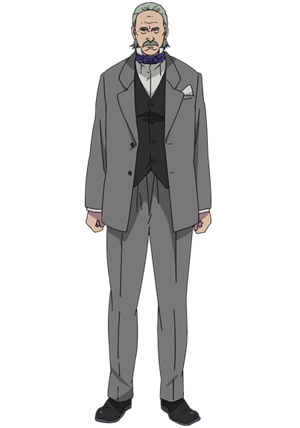 Episode 7
Gilbert Warlock (ギルバート・ウォーロック, Girubāto Wōrokku) is one of the top four executives of Gui Carlin mafia group. He is known as the "Ears".

Gilbert is an elderly man with medium long gray hair. He has a mustache. He wars a suit with a purple bowtie.

Gilbert had hired a man to bid and win for him a Black Fairy Tome. "Sweetie" Bitter Sweet heard of that and went to visit him, wanting to see it, but Gilbert send her off. Bitter Sweet returned with Marlya Noel and Klara Kysenaria, again wanting just to see the page, but Gilbert was still refusing, knowing she just needs to see it to memorize it and no one will steal from him. Setting him up, Bitter Sweet revealed that the two girls were Dorothea members and then she used her fairy. After Marlya used her fairy, she neutralized Gilbert and his men dropped their weapons.

Bitter Sweet then forced him leading her towards the page. As he led them to a dead-end room, he opened a secret passage and Bitter Sweet went through it and closed it, leaving all behind. When Free Underbar came, he asked Gilbert for different passage and Gilbert told him about one.