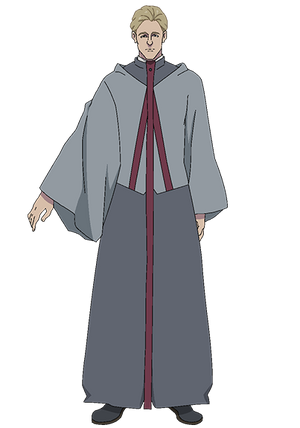 Episode 3
Glyph Mercer (グリフ・マーサー, Gurifu Māsā) is the Marco Bellwood's right hand man and Deputy Commissioner of Ministry of Fairies. He deals with investigations about artificial fairies and black fairy tomes. A descendent of Jay B. Mercer who wrote the Blue Fairy Tome. He is a member of the religious cult Eins Order.

Glyph has a blond short hair

Glyph escorted Free Underbar and Marlya Noel as they went into the Ministry of Faries to meet the vice-minister Marco Bellwood.

When an artificial fairy misbehaved, they called Glyph and other fairy technicians to figure out the cause, but couldn't.

Glyph was working with Marco collecting the Black Fairy Tomes and when they did, they proceeded with their plan. Glyph went to meet Golbarn Helwise, where he used Ewen Breeze's fairy Norca and fairy weapon Painsealer to kill Golbarn.

Prior to Golbarn's funeral, Ray Dawn's convoy was attacked by Eins and Beevee, they had to hide in a witness protection house. There Glyph finally found them and tried attacking Veronica and Marlya, using the little strength he had, Ray summoned his fairy and blocked Glyph's attack with it, before passing out. He then proceeded and took Ray's body.

Back at their HQ, he they took Ray's fairy-possessed fairy organ and put it into the fusion fairy, to resurrect the Divine Beast.

Seeing the destruction, Free realized how powerful the Divine Beast is. Following the path of destruction, he went to Eins Order base, where he faced Glyph Mercer. Free asked about Marco, but Glyph explained he sacrificed himself to the Divine Beast and that he will lead the people that remain alive after the Divine Beast is done. Glyph then attacked Free using his fairy weapon and fairy, but Wolfran came saving Free.

Free and Wolfran then combined their power and started fighting against Glyph. He told them they can't stop the Divine Beast, but as he wanted to lead the people that will survive, Wolfran realized there was a limit on how many the Divine Beast will kill. As they fought, Wolfran received a wound on the leg, but by a opening made by Free, he managed to get in and kill Glyph.