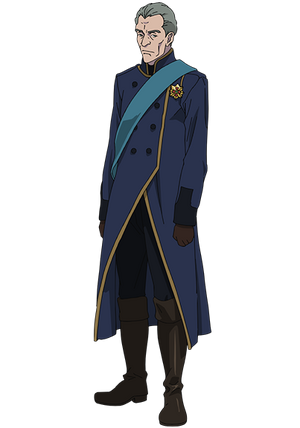 Golbarn is an elderly man with gray hair. He wears a blue uniform with blue banner.

Nein Auler visited Golbarn wanting him to not use the new artificial fairies and to speak about Gilbert Warlock, but he stopped the conversation. Later he met with Ray Dawn and Schwarz Diese speaking about peace and the upcoming event.

Golbarn was informed by Nein for the tempering with the artificial fairies. Speaking with Marco Bellwood, he concluded that they can't use them during the anniversary event.

During the anniversary and while giving a speech, Ted Livingston tried using the older models of artificial fairies to kill Golbarn, but failed.

The emperor Castal Harol summoned Schwarz Diese and Golbarn Helwise, praising him for saving Golbarn. The emperor told him that he will grant him a wish and Schwarz requested a Fairy Weapon, surprising all.

Golbarn later spoke with Nein and Marco, telling him about Schwarz request and knowing he requested it only because Ray Dawn already had one and not to protect the emperor. He still decided to give him one and told Marco to bring one out of the vault and Dorothea to transport it.

Realizing the rebellion Schwarz was starting, Golbarn realized he outwitted them and now they can only use the new artificial fairy soldiers models which are only a few. He authorized Nein to use her Fairy Weapon.

Goldbarn then informed the emperor Castal about Schwarz betrayal and the emperor stripped Schwarz from his title and ordered Golbarn to deal with him.

Free with Marco, delivered a letter from Ray Dawn. Reading it, Golbarn understood that Ray saw the upcoming rebellion of Schwarz and that Hapstadt was a distracting and the real target was Rodancia's Palace. He was then informed that an attack started at the Palace. Later he decided to take things in his own hand and let reinforcements towards the Palace to try and stop Beevee himself. As he led the fight there, Beevee left the palace and forced Golbarn to retreat.

Marco received the news of a new Black Fairy Tome has been found by Glyph. He quickly went to inform Golbarn that the tome and other relics were attempted to be smuggled out of their country, but due to Golbarn's recent close of trade, they were able to find them and prevent the smuggling. Goldbarn then told him to contact Dorothea to deal with the situation.

Nein had gathered information about high ranking businessmen related to Gui Carlin. She wanted to go after them and offered to take full responsibility if something went wrong. After listening to her, Golbarn agreed and let Dorothea go after the Gui Carlin members.

Nein brought Damien Carme to Golbarn, where he explained the black fairy tome and that Marco was planing on resurrecting the Divine Beast. Hearing all that, Golbarn was disappointed as he though Marco was close friend. He questioned why Free was fighting with Dorothea and the country, as they were enemies during the war. Free told him that he does not want to see people die like in the war and Golbarn agreed that was his wish too. He then ordered Dorothea to go and arrest Marco and his men.

As Marco and his men had escaped before Dorothea came for them. Glyph Mercer later went to meet Golbarn Helwise, where he used Ewen Breeze's fairy Norca and fairy weapon Painsealer to kill Golbarn.