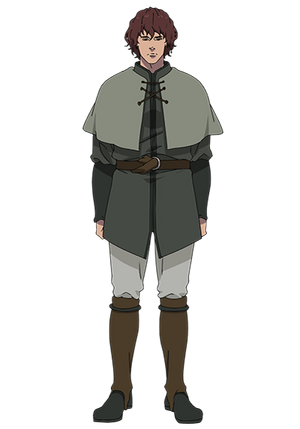 Episode 13
Ivan Noel (イヴァン・ノエル, Ivan Noeru) was a guardian from Suna village and the father of Marlya Noel.

Ivan along with Thori Dawn and Olek Gunnar were exploring the forest near Suna village. Olek asked him if his wife was going to give birth soon and Ivan confirmed. Olek was sure the child would be a girl, but then they heard a roar from the Esteemed One fairy. As they approached and observed, they realized it indeed was the Esteemed One and Thori told them they need to prevent the fairies fighting and hurting themselves. As Thori told them they need to separate them, Ivan decided he will handle it. Before going, Ivan told Olek he too was sure the child will be girl and had already decided to name it Marlya.

As he drew the attention of the Esteemed One with an arrow, he started running and used arrows with ropes that he shot at trees in attempt to slow the fairy. But as that wasn't slowing the Esteemed One at all, the fairy eventually caught up to him and ended killing him.