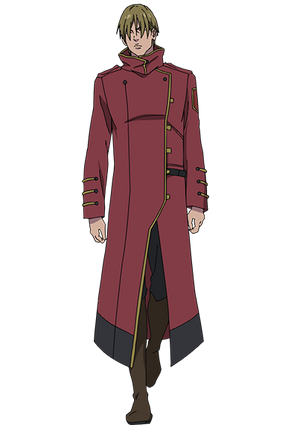 Episode 2
Jet Grave (ジェット・グレイブ, Jetto Gureibu) was a fairy soldier and comrade of Free Underbar during the war. He was one of the Seven Knights.

Jet is a young man with a short light brown hair that usually covers his eyes. He is usually wearing the red fairy soldier uniform.

Free Underbar was fighting Ewen Breeze during the unification war, as Ewen was about to finish and kill Free, Jet jumped in and took the attack with his own body. Ewen's spear pierced him and he later died from the wound.

As a fairy soldier and one of the Seven Knights, Jet was strong fighter.