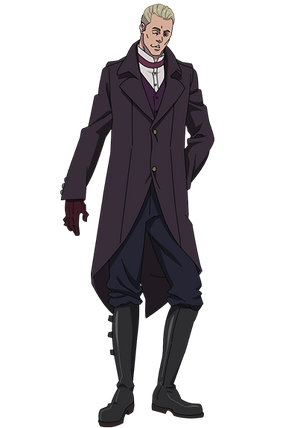 Episode 4
Jonathan Passpierre (ジョナサン・パスピエール, Jonasan Pasupiēru) is a member of the Gui Carlin mafia group. Patricia Pearl's partner. A self-proclaimed artist and sadist who claims to understand people by giving them pain.

Jonathan has a blond hair and wears a coat.

Jonathan is quite psychotic and think himself as an artist and enjoying hurting people.

Jonathan went with Patricia Pearl to the same cafe Free Underbar and Marlya Noel were. As they ordered, a moment later Jonathan disappeared stealing the Black Fairy Tome from Free. As Free and Marlya chased them, they went into an underground passages, where Patricia managed to separate Free and Marlya and Jonathan then started to stalk Marlya. He then started attacking Marlya, chasing her as she went outside of the underground passage back into the church. Jonathan the stabbed her, but then Veronica Thorn jumped between them. He questioned her of how she can stand between his art and him, but Veronica told him this wasn't art. As he got annoyed, they started fighting and he used his fairy. Veronica quickly attacked the fairy, but then the fairy exploded shooting knifes everywhere. As they continued to fight, Jonathan set a ring of fire trapping Veronica and letting her fight his fairy. Marlya managed to summon her fairy and helped out Veronica and both managed to escape the burning building. Jonathan also managed to escape, but Veronica then killed him with her fairy.

Jonathan is a skilful assassin, using knifes and ice picks to hurt and torture his targets.