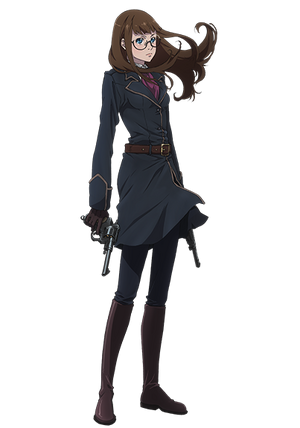 Klara has long brown hair going down her back she wears glasses and dresses in the standard Dorothea uniform.

Klara was on a mission in Derpe's ruin in former Ledrad. Using her fairy, she saw Free Underbar and Marlya Noel coming. As they came she asked them to keep quiet, so she can focus on her mission, and Serge Tova told them to indeed keep quite as she is scary when angry. As people arrived at the location, using her fairy, Klara realized one of them was a fairy soldier, who looked at her fairy and she realized he noticed them. Free and Marlya went to encounter them, and Serge and Klara remained to continue monitoring. A bit later, Klara was helping Serge aim, giving Free and Marlya a long-range support.

Klara was teamed up with Marlya on a possible Black Fairy Tome page and went to speak with the informant, but he organized an attack. Once Klara and Marlya easily dispatched his men, the informant quickly gave the information he had. Following the information and the target, they boarded a train, but weren't able to locate the target. Waiting for the next stop, Marlya asked Klara why he joined Dorothea and Klasa explained her backstory and how she was saved by Nein Auler. On the next station stop, they continued searching for the man and then saw him leaving the train. They chased him and managed to capture him.

Klara with Marlya assisted Bitter Sweet and went to see Gilbert Warlock. He was still refusing to let Bitter Sweet see the page, but unknowingly admitted in front of them that he has it. She then revealed that the two girls were from Dorothea and summoned her fairy. Klara signalled the Dorothea members using her fairy. The Gilbert men started shooting, but were injuring themselves due to her fairy ability. Marlya then used her fairy to neutralized Gilbert and his men surrendered. Bitter Sweet then forced Gilbert to lead her towards the fairy tome and after passing through a secret passage, she closed it behind her, leaving Gilbert and the girls behind. Later she and Marlya gave the black tome to Nein.

Like the rest of Dorothea Klara is a capable fighter in both marksmanship and swordplay. She is also capable of reconnaissance due to the type of fairy "tomereez" is.