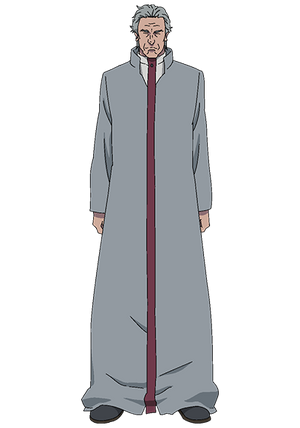 Episode 3
Marco Bellwood (マルコ・ベルウッド, Maruko Berūddo) is the Vice-Minister of Ministry of Fairies. A descendent of the first fairy scholar Hel S. Bellwood who wrote the Original Text of fairy tome. He is the leader of the religious cult Eins Order.

Marco is an elderly man with gray hair. He usually wears a long gray robe.

Marco was in a meeting with the ministry of military and Nein Auler, discussing what to do with the malfunctioning artificial fairies. As later they found evidence for tempering with them, Golbarn Helwise ordered that they can't use them during the anniversary.

Golbarn informed Marco that they will blame Sett for the blunder and Marco will succeed him. He then explained that Schwarz had requested a Fairy Weapon and ordered Marco to take one out of the vault.

Marco was looking at the Black Fairy Tome they had collected, further understanding how the fairy possession works, but still needed the 6th tome.

Marco received the news of a new Black Fairy Tome has been found by Glyph. He quickly went to inform Golbarn that the tome and other relics were attempted to be smuggled out of their country, but due to Golbarn's recent close of trade, they were able to find them and prevent the smuggling. Goldbarn then told him to contact Dorothea to deal with the situation.

Marco was visited by Nein Auler who wanted his support in going against Gui Carlin and he agreed. Before leaving, she spoke about the Black Fairy Tome and Marco explained they had 6 of the 9 tomes and were working on deciphering it.

Nein then visited Marco, delivering Black Tome Three and Six, as they found them in Gui Carlin's possession. As they spoke, she explained they believe the leak of information about Black Tome Nine was coming from the Ministry of Fairies. Later Dorothea obtained the last tome Nine, but Wolfran Row stole it and then went to give it to Marco. Collecting all the Black Fairy Tomes, Marco and other Eins members escaped, before Dorothea came for them.

Later at Eins Order HQ, Wolfran informed Marco that he failed to take Marlya. They discussed that Ray Dawn and Veronica are in Rondacia, along with Marlya, so all three fairy-possessed where on the same place and they can still proceed with their plan. Although as was going well, Marco said they were short in manpower, but Wolfran had someone in mind.

Later Glyph had managed to take Ray Dawn's body and they took Ray's fairy-possessed fairy organ and put it into the fusion fairy, to resurrect the Divine Beast. Marco congratulated Glyph so his good work and the beast awaken. As it started walking, he obliterated Marco and his men, to Marco's joy.

As an ordinary person, he doesn't posses any additional powers or abilities.