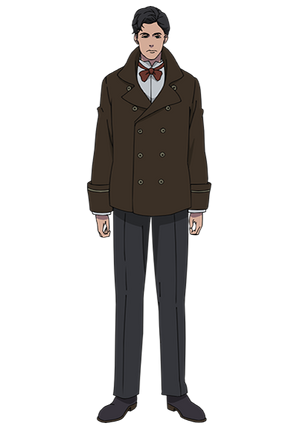 Episode 14
Michel Connor (ミケル・コナー, Mikeru Konā) is a descendant of Timothy Connor, the one who wrote the Red Fairy Tome. He is a member of the religious cult Eins Order.

Michel with Wolfran Row, went to see Ray Dawn as he stayed in a ruined castle, after his train was attacked. As they talked who may had attacked him, Michel wondered if it was Golbarn, but Wolfran explained that while he indeed may want Ray dead, he would not be able to attack him and, so likely the enemy was Arcame. Wolfran then told Michel to take Ray and escape safely.

When Dorothea obtained the Black Fairy Tome Nine from Eajey Daven Thor and were heading towards their HQ, Wolfran and Michel attacked them using Yale. As they took the black fairy tome, Marlya Noel chased them. When she confronted Michel, she asked him how did he had the Yale, but he told her she didn't need to know as would soon die. He made Yale attack her, but the fairy avoided contact with her and started rebelling. He again forced Yale to his command and attack her, but this time Marlya used her fairy to stop Yale. As Ash Clad was holding Yale, Michel was wondering why does the fairy no longer listen to him and as the fairy got defeated, a fairy flew out of his chest. Michel then asked to be killed, as he had already fulfilled his part and the tomes were collected, but instead Marlya arrested him.

Michel was visited in prison by Wolfran, who asked him why does he still lives. Michel explained that was because he had important information he needed to share before dying and then told Wolfran that Marlya Noel was fairy-possessed and she burned his fairy to nothing, taking his fairy organ. Wolfran had already suspected that, but this confirmed it. Wolfran then gave him poison that would make him like he died from natural cause and Michel gladly accepted.