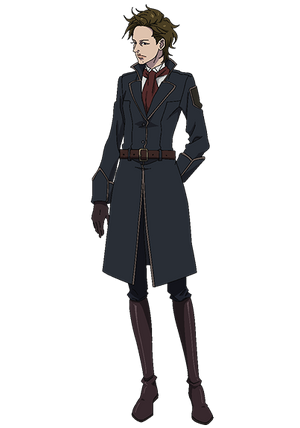 Episode 2
Nein Auler (ネイン・アウラー, Nein Aurā) is the Director and First Unit Commander of Illegal Fairy Regulatory Agency Dorothea. She is the only female member of the Seven Knights, also known as the Witch of Ainedern.

Nein has a short brown hair and blue eyes. She has a mole on the left side under her lips. She is usually seen wearing her Dorothea uniform.

She has a serious personality, given the role she's shown in. Nein keeps formalities and discipline at all times, though she is shown to have a kind side as she let Chimee stay close to her and joked with Lily in the epilogue of the anime about becoming the next prime minister.

Nein was reading Free Underbar report about his infiltration end in Gui Carlin mafia and the reason of that being Marlya Noel and that she is fairy-possessed. Nein didn't want to believe that but told Free to rewrite his report and keep it a secret and not mention Marlya's self-possession.

Nein was speaking with Schwarz Diese about completion of the investigation she set out Free and that she will be giving her report to the government.

Free and Marlya later spoke with Nein, telling her that Bitter Sweet proposed working together and Nein agreed.

Marlya and Klara then brought the fairy tome to Nein, telling her that Bitter Sweet escaped. Serge then stormed in saying they found evidence for the tempered artificial fairies.

Nein was informed by Golbarn that Schwarz wanted a Fairy Weapon and he intend to give him one and that Dorothea will have to transport it.

After Golbarn realized the rebellion Schwarz was starting, he authorized Nein to use her Fairy Weapon. After retrieving her weapon, she head out to Hapstadt, where she engaged in a battle with the rebellion. Using her Fairy Weapon, she was easily dispatching the artificial fairy soldiers. As she managed to suppress the rebels, she wondered why it was that easy.

Nein was informed by Free and Marlya that Gui Carlin member Eajey Daven Thor had taken the Black Fairy Tome. They also informed her about Damien Carme arrest and that he had connection with Veronica Thorn. As she went to speak with him, he insisted they speak one on one and she agreed. Then Damien explained who he was and what was his goal. After that talk, Nein decided they to go after Gui Carlin and told Free to get information from Bitter Sweet. Nein met with Marco Bellwood getting his support too. She then went to Golbarn Helwise revealing high ranking businessmen being related to Gui Carlin and wanted to arrest them, ready to take responsibility if she was wrong and Golbarn agreed. Dorothea then went after Gui Carlin members arresting all they could.

Nein then visited Marco, delivering Black Tome Three and Six, as they found them in Gui Carlin's possession. As they spoke, she explained they believe the leak of information about Black Tome Nine was coming from the Ministry of Fairies. She then visited Damien, who told her that Marco and Glyph were ancestors of fairy scholars who wrote two of the fairy tomes and that they were from Ein.

Hearing about how Wolfran had stolen the black fairy tome and the fight between Michel Connor and Marlya, they realized Wolfran had connection with Marco and the Ministry of Fairies had transplanted a fairy organ to Michel. She ordered Free and Marlya to bring Damien as he knew more about fairy-possession. He explained what Marco's goal was and wanted to speak with Golbarn. As they went to him, Golbarn listened to them and ordered Dorothea to arrest Marco and his men. As Marco and his men had escaped before Dorothea went after them, Nein and the other Dorothea members started investigating Marco trying to find his location.

When Golbarn was assassinated, Ray Dawn came to Rondacia wanting to meet Castal Harol. Nein agreed to lead him and there he requested to become the new Prime Minister and Castal agreed. When Golbarn's funeral was coming, on their way there, the convoy got attacked by Eins Order, they had to reroute, but were again attacked by Eizenkopf. Beevee then showed up and started fighting the injured Ray Dawn, but Nein joined the fight protecting Ray Dawn. She ordered Dorothea to take away Ray Dawn. Beevee then cut Nein's sword and told Sophie to give her fairy weapon, as he wanted to fight Nein in even terms. As they kept fighting, they used their fairies and Nein's fairy instantly froze Beevee's fairy. After a short conversation, Beevee saw an opening and attacked, but Nein reacted fast, although she received an injury, she cut down Beevee. Sophie then turned her weapon at her, but Lily Heineman came with backup and saved Nein.

Not much information is known about her powers, however she is known as one of the Seven Knights and one of the most powerful ones. Her fairy, Morzeneak possesses the ability to freeze other fairies as well.