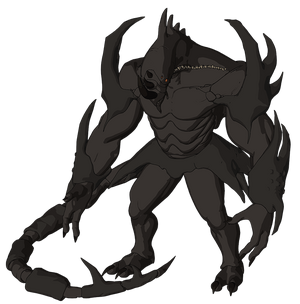 Episode 2
Norca (ノルカ, Noruka) is a fairy serving under Ewen Breeze. One of the largest fairies. The fairy organ with the fairy was later transplanted into Glyph Mercer.

Norca is a large monster with two pairs of eyes and three horns. It has large spikes on his arms and a long tail ending with a spike. It has a large mouth that go from shoulder to shoulder.

Large Mouth: It can swallow the enemies with his big mouth.