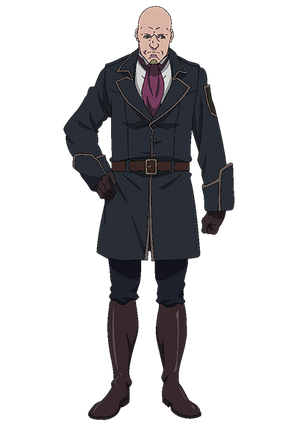 Oz is middle-aged man with no hair. He is usually in his Dorothea uniform.

Oz was in Dorothea's quarters in Rodancia, where he and other Dorothea members were practising shooting. He was impressed by Marlya's accuracy with her rifle.

At Dorothea HQ, after Marlya Noel's first mission, Serge Tova organized a welcoming party at a bar, where Dorothea members enjoyed drinking together and chatting.

Oz and other Dorothea members were tasked with the transport of the Fairy Weapon for the Schwarz Diese. While traveling with the train, they got ambushed by Beevee Liscar and his men. As Beevee attacked the train and Lily, Oz got angry and used his fairy to attack Beevee and started fighting him. But Beevee easily defeated him. Moments later seeing that Sophie was about to kill Marlya, he rushed and protected her. He then took her up and started running with her, but got shot in the back few times. As he fell on the ground exhausted, he was still protecting Marlya under him. Beevee approached him, saying he would have enjoyed fighting him again, but with those injuries, he won't be able to fight ever again. To "save" him from that, Beevee dealt a fatal attack and left. Oz was still smiling for Maryla and protecting her. Later while Marlya and other Dorothea members were around him, he took his last breath.