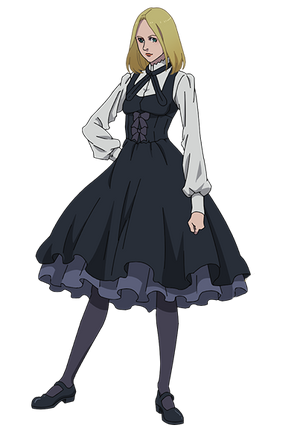 Patricia is a young blond woman with green eyes. She usually wears a long dark dress.

Patricia met with "Sweetie" Bitter Sweet at a cafe. She ordered just fresh water and was annoinyed by the waiter questioning her and commenting she wouldn't drink something that was flavored. Bitter Sweet then told her she will need her "cleaning" service of her and Jonathan Passpierre.

Patricia along with Jonathan went to the same place where Free Underbar and Marlya Noel were eating. She ordered just water again and something quick for Jonathan. A moment Jonathan was gone and Patricia stood up to leave. Free realized they stole the Black Fairy Tome and went after them.

They went into underground passages, where Patricia managed to separate Free and Marlya and attacked Free. While fighting Patricia took out 2 blades from the briefcase and fought with Free, until he broke her blades. She then quickly ran towards her briefcase, taking out a rifle. Red Hood assisted Free disarming Patricia. Free then got hold of Patricia's briefcase and pushed it towards her, telling her to use it, but Patricia took it and ran away, leaving the Black Fairy Tome behind.

After Bitter Sweet received news of the Black Fairy Tome Nine, she hired Patricia and they went to take it, but were beaten by Eajey Daven Thor. Bitter explained who he was and that he was dangerous and as they saw Damien Carme, Bitter Sweet went and made a deal for them to work together.

On the next day, they were figuring out what to do. Damien went to talk with Free and Marlya, and moments later, they were attacked by Eajey. As they had to fight, Patricia used a surprise attack with her fairy Boneless, but Eajey easily blocked her and defeated her fairy with his fairy weapon. Seeing she was no match for him, she escaped and later left the island with Bitter Sweet.

Knowing where Eajey was, she went to Mazria with Patricia, knowing that Dorothea will attack and hoped she could use the commotion to snatch the black fairy tome.