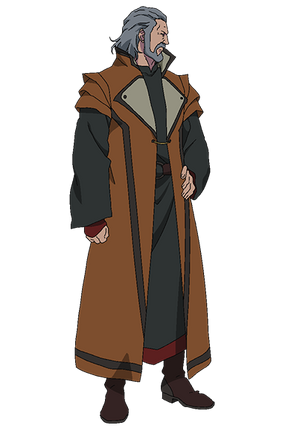 Episode 1
Ray Dawn (レイ・ドーン, Rei Dōn) is the Duke of Karuo who was one of the seven knights during the war. As one of the five dukes, he was granted territory by the emperor after the war.

Ray Dawn met with Schwarz Diese and Golbarn Helwise and they spoke about peace and the upcoming anniversary event. During the event, an assassination attempt was made to kill Golbarn. Schwarz rushed to save him, but Ray Dawn didn't move at all.

Ray Dawn was visited by Dorothea members to inspect his Fairy Weapon and artificial fairy soldiers. Seeing Marlya Noel, he understood she hated him, as that wasn't the first time someone looked him like that. When the Dorothea members were leaving, Ray handed a personal letter and asked them to give it to the prime minister, as it's important he to read it.

As Schwarz reached the emperor using secrets tunnels, Ray Dawn appeared behind him and used his fairy. Ray easily defeated all of Schwarz men, including him. Schwarz questioned him why he server Golbarn if he had so much power. But Ray told him he didn't like him and killed him.

After the events with Schwarz Diese, Ray was returning home with some Dorothea members escorting him. When their train was attacked and derailed, they stayed for the night at a ruined castle. There Wolfran came with Michel Connor, a descendant of the person who wrote the Red Fairy Tome. As they spoke, they realized it was Arcame that was attacking him now and trying to kill him and by suggestion of Wolfran, they left the castle.

Learning of Golbarn Helwise death, Ray Dawn headed towards Rondacia, wanting to meet the king, ready to give up his Duke title in order to work towards saving the situation with Unified Zesskia. Speaking with Castal Harol, he wanted to lose his Duke title and become Prime Minister and Castal agreed. As Marlya had revealed she was Suna survivor, he later summoned her to talk with her. He unleashed his fairy on hers and asked her what does she hear. Marlya told his fairy didn't want to kill her, but just test her. Ray Dawn told her that Marlya's fairy wanted salvation. He then told Marlya to not listed to the fairies voices, as this was no longer the world of fairies. Ray Dawn told her that the voices of the people were more important to him. Marlya then questioned him, why did he kill everyone at Suna, but Ray Dawn only said that only he should had the fairy-possessed power and that they need to find Veronica.

Prior to Golbarn Helwise's funeral, Eins Order made ambush on Ray Dawn's convoy and made him reroute. There Eizenkopf ambushed them again and Beevee Liscar showed up. He was excited to fight Ray Dawn, but was pushed back. As Ray Dawn was injured during the ambush, Nein Auler came confronting Beevee. Nein told Marlya and Robert to take Ray Dawn elsewhere. As they ran, they were forced to hide in a witness protection house. There Robert had to leave in order to look for medical help for Ray Dawn. Soon Veronica came and started fighting Ray Dawn. Marlya intervened, saying that Ray Dawn had regrets, even though he was denying it, otherwise if he was that cold, he would not had let Veronica live the previous time they met and she tried to kill him. Little by little, Veronica's desire to fight faded away and Ray Dawn apologized for what he did. Glyph Mercer then showed up and tried attacking Veronica and Marlya, using the little strength he had, Ray summoned his fairy and blocked Glyph's attack with it, before passing out. He then proceeded and took Ray's body.

At Eins Order, they took his fairy-possessed fairy organ and resurrected the Divine Beast.

As one of the Seven Knights, he is formidable fighter.