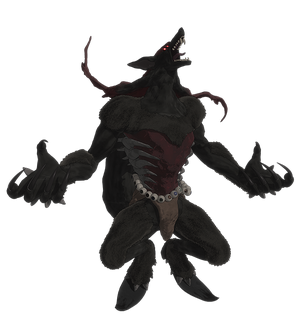 Red Hood is very tall (standing twice the height of his master, Free) and resembles that of a werewolf. He has two pairs of red eyes on both sides of his face as well as a long mane of red fur on top of his head and his spine and ribs appear to jut outwards from his body. He wears a belt made of eyes around a beige loincloth.

Sonic Attack: Should an enemy be too strong or too far away, Red Hood can howl and unleash a powerful beam of intensely concentrated sound from his mouth.