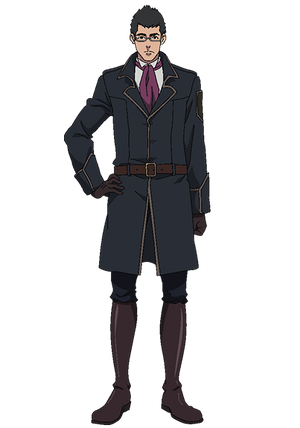 Robert is an young man with dark short hair and glasses. He is usually seen in his Dorothea uniform.

Robert was in Dorothea's quarters in Rodancia, where he and other Dorothea members were practising shooting.

At Dorothea HQ, after Marlya Noel's first mission, Serge Tova organized a welcoming party at a bar, where Dorothea members enjoyed drinking together and chatting.

Robert was later working with Free Underbar having interrogations to find the cause of the malfunction of a artificial fairy, but they couldn't find anything. He later interrogated a man that was supposed to buy a Black Fairy Tome, but as the man refused to speak, Robert concluded that even if they break his legs, he won't speak up.

Robert kept investigating and spoke with a friend from the Security Bureau. As he spoke with Free on the possibility of Arcame being involved, and then with the fairy technicians, he concluded that a man he was chasing while working the for security bureau may be involved and to work with Arcame. He reported that to Nein Auler and she told him to continue his investigation and share information with the security bureau.

Robert went to speak with Hanns, but learned he was already taken by the Security Bureau and went to see Hanns there. He tried to found out what he was hiding.

Continuing his investigation, he understood the man they suspected, Eddy, had a son and that he was Ted Livingston. He returned to Hanns and they realized Ted was the one tempering with the new models and that he had a device to control all older models. He then rushed towards the plaza to try and stop Ted. He informed Nein and she ordered the arrest of Ted. They managed to stop him, before he killed Golbarn Helwise and arrested him.