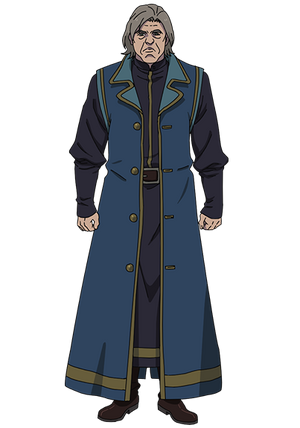 Episode 4
Schwarz Diese (シュヴァルツ・ディーゼ, Shuvarutsu Dīze) is the Duke of Hybranz. One of the five dukes who played a big role into the unification and was granted territory by the emperor after the war.

Is elderly man with gray hair and blue long coat.

Nein Auler was speaking with Schwarz Diese about completion of the investigation she set out Free and that she will be giving her report to the government. He told her since they know from way back, that she can use his name and not title, but she insisted as she was his subordinate in the past.

Later Schwarz was visited by Wolfran Row to inform him that he was leaving. Schwarz questioned him for what purpose he was living. Wolfran told him this was the only way of life he could choose, making Schwarz laugh and also saying that he was the same.

The emperor Castal Harol summoned Schwarz and Golbarn Helwise, praising him for saving Golbarn. The emperor told him that he will grant him a wish and Schwarz requested a Fairy Weapon, surprising all.

Schwarz met with Beevee Liscar and organized the train ambush that will be escorting his Fairy Weapon. he bordered the train, commenting that he expects nothing to happen, but was preparing his safety for the ambush and suffered minor injuries from it.

As Schwarz started the rebellion, he was easily and unnoticeable advancing towards the Rodancia's Palace using royalty only known tunnels that he obtained information from a former royalty member. Reaching the emperor, he told him he was there for his sake. He then wondered where Wolfran went, but Ray Dawn told him he server his purpose so he left. Ray Dawn then killed all of Schwarz men and defeated him too. Before dying Schwarz wondered why he was serving Golbarn if he had so much power, but Ray Dawn told him he didn't like him and killed him.

As an ordinary man, he doesn't possess any additional powers or abilities. He managed to get a Fairy Weapon, but he wasn't the best fighter and was easily defeated by Ray Dawn.