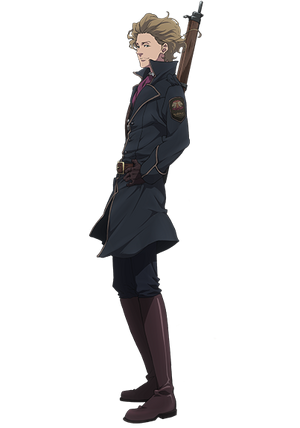 Serge is a young man with unruly brown hair. He is usually seen in his Dorothea uniform.

Serge has a fun loving personality in contrast to his partner, Clara. He jokes around a lot and tends to be more laid back compared to the other characters.

Serge was on a mission with Klara Kysenaria in Dirpe's ruins. There he was joined by Free Underbar and Marlya Noel. As she introduced himself, Klara asked them to be quiet, so she can focus with her fairy. Serge quickly joked that Klara was scary when angry, so they indeed need to keep quiet. As their targets arrived, Free and Marlya went to encounter them, and Serve and Klara remained to continue monitoring.

As they came back and Free and Marlya started fighting Wolfran, Serge used his fairy and shot at Wolfran, who then escaped. He told Free to go after him and that he and Klara will be giving long-range support. Serge then shot on of the three artificial fairies that attacked Free, helping him defeating them.

Serge with other Dorothea members went to the palace as the rebellion by Schwarz Diese started. They engaged Beevee Liscar in a fight and with group efforts they managed to injure his left arm and the make him retreat.