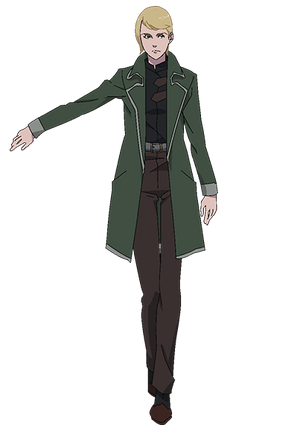 Sophie is a young woman with a blond short hair. She is usually wearing a green coat.

Sophie was accompanying Beevee Liscar during his meeting with Wolfran Row for the purchase of the artificial fairies. After meeting him, she reminded Beevee they needed to go.

She was with Beevee, when he was waiting for the train with the Fairy Weapon to ambush it and saying she will die for him. As the train approached, she stood on the tracks and shot the driver. During the fight, when Marlya Noel started taking out the snipers, Sophie went after her and was about to defeat her, but Oz Mare protected her.

Sophie went with Beevee, when they attacked Ray Dawn convoy. As he later started fighting Ray Dawn, and then Nein Auler, Beevee told Sophie to give Nein her fairy weapon, in order to fight her fairly. In the end, he died from Nein. Sophie went to Beevee's body and closed his eyes, and then turned at Nein pointing her weapon. Lily Heineman then came with other Dorothea members, they opened fire at Sophie, who tried to shoot back, but got shot and died.