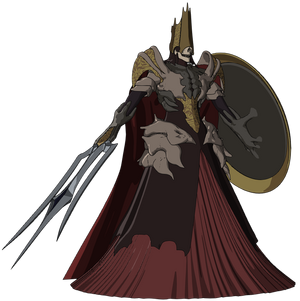 Thronetaker is one of the humanoid fairies as its fairy-possessed. It's a skeletal king knight with large shield and three point spear. It has bone and gold armor and red mantle. It wears a crown-like helmet that covers his face from the nose up.

Rust Ability: Thronetaker has the ability to turn any metal it touches into rust in few seconds.