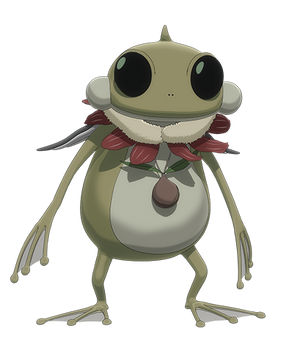 Episode 2
Tomereez (トメリーズ, Tomerīzu) or Tommelise is a fairy serving under Klara Kysenaria. It possess special eyes, allowing him to see more things. It specializes in infiltration and surveillance.

Tomereez has the appearance of a frog that can fly. He has a big dark green eyes and wears a fruit/nut necklace.

Tomereez has the ability to fly. His special eyes allow him to see far more than ordinary people, like having a thermal vision, which also allows him to see if someone has a fairy in him or not. All that he sees or hear, is being directly transferred to his owner, Klara Kysenaria, making him ideal for infiltration and surveillance missions.