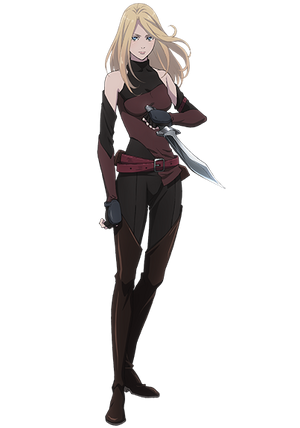 Episode 1
Veronica Thorn ( ヴェロニカ・ソーン, Veronika Sōn) is Marlya's childhood friend. She and Marlya were the sole survivors of their village being burned during the war. She swore revenge on Ray Dawn, the traitor general responsible for the burning of her village. She learned to excel in combat skills, and eventually became a cold-hearted assassin. Like Marlya, she can also control fairies without undergoing fairy organ implant surgery.

Veronica is a young beautiful woman with long blond hair and blue eyes. She usually wears a dark long sleeves with uncovered shoulders.

Veronica used to be a sweet young girl, but after the events in her village she completely changed. Now she is more cold-hearted and doesn’t show emotion even after seeing her long lost friend. She is obsessed with taking revenge on Ray Dawn, the man responsible for what happened in her village.

Veronica was on a mission by Damien Carme to steal a page from the Fairy Black Tome that was getting sold in an auction house. She infiltrated the place and started killing people to steal the page. As she took the page, Free Underbar came and started to fight her. In that moment Marlya Noel appeared too, recognizing Veronica and calling her wanting to speak with her. Veronica was ignoring her but in the end told her that her old self is dead and she is no longer the person she knew. As the fight continued outside and Veronica's fairy was fighting with Free and his fairy, Marlya joined them and using her own fairy stopped the fight. Veronica was surprised that Marlya also had a fairy, but managed to escape. Later she gave the page she stole to Damien, but he immediately understood the page was fake.

Veronica was observing Marlya the whole time she was in Cain Distarol house. She then followed her and when he was attacked by Jonathan Passpierre she jumped to save her. Jonathan questioned her of how she can stand between his art and him, but Veronica told him this wasn't art. As he got annoyed, they started fighting and he used his fairy. Veronica quickly attacked the fairy, but then the fairy exploded shooting knifes everywhere. As they continued to fight, Jonathan set a ring of fire trapping Veronica and letting her fight his fairy. After Marlya managed to summon her fairy, they managed to escape from the burning building. Jonathan also managed to escape, but Veronica then killed him with her fairy. Before leaving she again told Marlya to think of her as dead and not continue looking for her.

After the events with Schwarz Diese, Ray Dawn was heading home with the train and Veronica was following him with her motorcycle. When his train got attacked, he was forced to stay for the night at a nearby ruined castle. She sneaked in the castle, but faced Wolfran Row and started fighting him. She was loosing as his he and his fairy were stronger, but then Marlya and Free came and saved her. Veronica then jumped in the water to escape, but as she didn't came out, Marlya jumped too to save her. As she saved Veronica, she started a fire to warm her. When Veronica waked up, they talked and Veronica asked her why is she stopping her from killing Ray, but Marlya told her that won't return Suna and that she haven't lost all, as she still had Marlya, but in the end Veronica still left.

When Damien received news of the appearance of the Black Fairy Tome Nine, he and Veronica went to take it, but Eajey Daven Thor had already beaten them. They fought him, but Veronica was no match for him, so they had to run. "Sweetie" Bitter Sweet then approached them and offered them to work together and although Veronica didn't agree, Damien accepted. On the next day, they were trying to figure out what to do, but then they saw Free and Marlya and Damien went to talk with them in hope to get more info. Moments later, they were attacked by Eajey and Bitter Sweet and Veronica fought him, but were to match. As they had to run, he chased Veronica and she accidentally met Free and Marlya who helped her out and she managed to escape, while they stayed fighting Eajey.

Veronica was present when Free and Eajey fought at his castle in Marzia. As Eajey fell to his death, she then took his fairy weapon.

Veronica later followed Ray Dawn to Rodancia as the Prime Minister Golbarn Helwise was assassinated. As he was heavily protected, she was waiting for her chance. Using Chima, Marlya was able to find Veronica and explained about Eins Order, but Veronica had only one mission in her life and refused to listen.

Prior to Golbarn's funeral, Veronica was following Ray Dawn and he was attacked by Eins and Beevee, they had to hide in a witness protection house. As Ray was alone with Marlya, Veronica came and started fighting Ray Dawn. Marlya intervened, saying that Ray Dawn had regrets, even though he was denying it, otherwise if he was that cold, he would not had let Veronica live the previous time they met and she tried to kill him. Little by little, Veronica's desire to fight faded away and Ray Dawn apologized for what he did. Veronica wondered if she could still live a normal life, and Marlya assured her. Glyph Mercer then showed up and tried attacking Veronica and Marlya, using the little strength he had, Ray summoned his fairy and blocked Glyph's attack with it, before passing out. He then proceeded and took Ray's body.

When Marlya and Veronica woke up, they couldn't find neither Ray or Glyph. Knowing what Eins goal was, Marlya told Veronica to run somewhere safe and leave Rondacia, but Veronica refused, wanting to stay with her. They followed the Divine Beast around the city, trying to figure out how to stop him. As they heard it's voice, Marlya realized the beast didn't want to kill, but was forced to and she decided to free him. They forged a plan that they can cut the Divine Beast with fairy weapons and Veronica to use his fairy to reach its heart. They eventually caught up to the beast and started fighting it. Marlya lost her fairy weapon and Veronica protected her and then went after the beast, but as he was going to hit him, she got pierced by one of it's tentacles. Marlya went to her and Veronica told her that she wanted to attend for all the bad things she done and use her life for Marlya's sake. Veronica then managed to stood up and pushed Marlya in a hole, as the Divine Beast attack came and turned her to dust, but saving Marlya. Veronica's fairy then went into Marlya and fused with Ash Clad.

Like Marlya, she can also control fairies without undergoing fairy organ implant surgery. She is also good in close combat and uses a knife to fight.