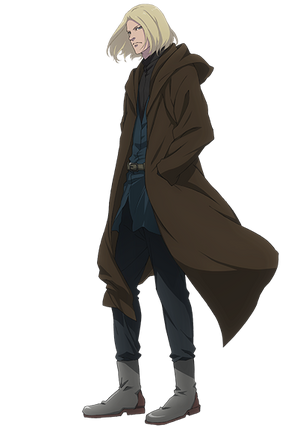 Episode 1
Wolfran Row (ウルフラン・ロウ, Urufuran Rō) is a former Fairy Soldier who fought alongside Free during the war. The war claimed the lives of his wife and child, and he turned to vengeful terrorism in the aftermath, often working with the Arcame mafia. He is a member of the religious cult Eins Order.

His personality is moody and hostile not wanting to know anyone even before the loss of his wife and young child during the war. He only interacted with his fellow soldier's sparingly.

Wolfran was meeting with people nearby an abandoned fairy factory, to purchase artificial fairies. As the sell was going to happen in Derpe's ruins, he realized the information was leaked and went towards the village ruins to separate the Dorothea members. He successfully fooled Free Underbar and Marlya Noel, but they managed to return fast and started fighting him. Free, being a former comrade of his during the war, started asking him questions, but Wolfran didn't answer him. He then made his fairy attack Marlya and as her fairy protected her, Fitcher cut Ash Clad's arms. Serge Tova then attacked him too, and Wolfran decided to run. He informed the rest of the people that their deal was leaked and they started running and released three artificial fairies to fight the Dorothea members. When the fairies were defeated, he encountered Free again, before running again, but first killing all of the people he was dealing with, in order to not leak any information. Later he visited his wife and daughter grave, which were near that location.

He later met with Beevee Liscar, bringing the artificial fairies. Beevee asked him if he was a merchant or soldier, or possible a pebble, but Wolfran only answered for himself, saying he wasn't none of that.

After the events with Schwarz Diese, Rey Dawn was returning home, but his train got attacked and he had to stay at nearby ruined castle. There Wolfram came with Michel Connor and they spoke realizing it must be Arcame that is after Ray. He suggested Ray to escape with Michel and soon after that met Veronica. As they fought, he commented she was good and realized she was a fairy possessed. He was winning over her, but then Marlya and Free came. As he started fighting Free, Veronica escaped and Marlya followed her. As he kept fighting with Free, he kept asking him why he ended like that and what happened to his family. Wolfram eventually escaped and asked Free for what he was fighting for.

When Dorothea obtained the Black Fairy Tome Nine from Eajey Daven Thor and were heading towards their HQ, Wolfran and Michel attacked them using Yale. He managed to get the fairy tome and escape. Later he went to Marco Bellwood and gave him the last black fairy tome.

Michel was visited in prison by Wolfran, who asked him why does he still lives. Michel explained that was because he had important information he needed to share before dying and then told Wolfran that Marlya Noel was fairy-possessed and she burned his fairy to nothing, taking his fairy organ. Wolfran had already suspected that, but this confirmed it. Wolfran then gave him poison that would make him like he died from natural cause and Michel gladly accepted.

After that Wolfran went and faced Marlya when she was alone, wanting to take her fairy-possession fairy organ. As they fought, she her fairy used the attack that is able to erase the fairy organ and Wolfran felt strange. Marlya told him she could still save him and his fairy, but that only angered Wolfran. As they kept fighting, Free eventually came and Wolfran decided to run.

Back at Eins Order HQ, Wolfran informed Marco that he failed to take Marlya. They discussed that Ray Dawn and Veronica are in Rondacia, along with Marlya, so all three fairy-possessed where on the same place and they can still proceed with their plan. Although as was going well, Marco said they were short in manpower, but Wolfran had someone in mind. Wolfran then went and started a riot in prison, freeing Axel Laboo making him send a message to Beevee.

Heading towards Golbarn's funeral, they convoy was attacked by Eins. As they located Wolfran, Serge tried shooting him, but Wolfran had obtained fairy weapon Fratanil and defended. Moments later Free went to fight him. He asked Wolfran if he was doing this for his dead family and what will be left after that, but Wolfran told him that nothing will be left. Wolfran also questioned Free why he was fighting and Free told him to keep the peace, as if there was peace, Wolfran's family would not had died. Free then used an opening created by his fairy and slashed Fratanil in two. He concealed his weapon and punched Woflran, telling him no matter what he do, he won't let the world end. Wolfran returned to Eins Order HQ, where he saw Free getting attacked by Glyph and saved Free.

Free and Wolfran then combined their power and started fighting against Glyph. He told them they can't stop the Divine Beast, but as he wanted to lead the people that will survive, Wolfran realized there was a limit on how many the Divine Beast will kill. As they fought, Wolfran received a wound on the leg, but by a opening made by Free, he managed to get in and kill Glyph. Wolfran then told Free to go, as he stood there unable to move, realizing he will remember his family forever.

As a fairy soldier, he is skilled in fighting and uses small claws for close range fight.